The Held and Firmly Bound IOU 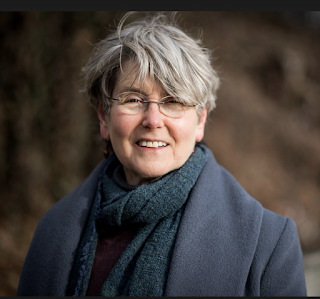 Nathalie Anderson’s long poem Held and Firmly Bound puts a unique spin on race relationships in America. The work is based on an IOU that was written before the United States Civil War in which a member of Anderson’s white family pledges to pay a sum of $2400 to a free person of color.

Anderson’s introduction begins with the language of the debt declaration:

KNOW ALL MEN BY THESE PRESENTS, THAT I Alfred H. Dunkin, Trustee of M.D. Huger,  am held and firmly bound unto Betsey Garrett, a free person of color, in the full and just sum of Two Thousand Four Hundred Dollars….

In an interview with Anderson conducted by the Dresser on April 22, 2022, the author said that Dunkin and Huger are family names she recognized but she knew nothing about the three people mentioned in the IOU and that the debt was extraordinarily high for its time. Anderson’s brother conjectured that Alfred Dunkin and M.D. Huger might have been brother and sister, given Huger’s initials including a “D” (possibly standing for her maiden name Dunkin) and given that women were often barred from owning property (a reason for him being named Trustee).

Anderson said this work was hard for her to start because she wanted to avoid putting words in Betsey Garrett’s mouth and that she wanted to stay focused on her family. When she got beyond her writer’s block, she wrote poems that the Dresser will say are suppositions. Most of them begin say, let’s say, or suppose. Section I is titled Say. Anderson said her goal was to create characters/”personalities who could carry that level of indebtedness.” Characters include a Mama’s boy of varying behaviors, a daughter who compulsively washes and then is faced with the stench of her father’s dying, a mean man of egotistical parents, a country bumpkin of whom Charleston sophisticates make fun. There are nine such characters and some of them are pictured interacting with Betsey Garrett.

from the red-clay hills, in Charleston

for the Season, settled at your Aunt Em’s,

and about the serious business—or so

your mama tells—of finding you

up to snuff. First off, you’ve grown out

raw-boned, rangy, stark as a mule

your flirty cousins. … Even the gal who

sets your clothes out knows what’s what.

“you got a discerning eye, so you

can see I ain’t. But I got hold of a thing

As for that gal, after all these works,

you know her name and you call her by it.

“Betsey Garrett,” you say, while she’s

packing up your clothes, “I am my mama’s

only living child, and when I come

into my own, I’m going to buy you out,

I hate them cousins and I owe you, gal,

and when I go to my reward

I’ll leave you everything I’ve come to own.” …

Section II is titled “Held.” The thirteen poems in this section all end with the refrain “held and firmly bound.” Anderson said she sees these poems in the tradition of a ghazal and like the ghazal, she hears her audience calling out the repeating refrain. The poems start out short. The first poem has six lines:

of blue at the breast, her fingers’ twining and

intertwining fretting up the shakiest of nests.

His arm snaking round and his hand hovering—

she knew he’d swallow her down. Knew he’d keep her

own hands flustering til held and firmly bound.

The last several poems are two pages each and deal with such complex subjects as: a celebrated English actress who unwisely marries a wealthy southerner who owns and mistreats slaves, an American Revolutionary War story featuring Anderson’s relative Francis Kinloch Huger and Marquis de Lafayette, and the contemporary American film Glory—about the Black Civil War regimen led by a young white officer with such stars as Denzel Washington, Morgan Freeman, and Matthew Broderick. With these three stories, Anderson brings Section II Held to a cinematic fever pitch that exceeds Southern storytelling in the tradition of William Faulkner (and Faulkner’s Quentin Compson is called up in the last stanza of Held).

all you please. There’s one woman stopped cold as 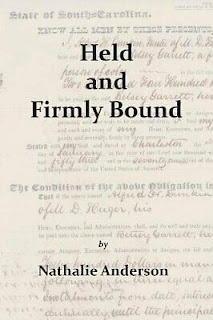 the credits roll in Philly. That grit’s in her teeth. That salt’s

in her bones. No distance at all. By her own soil and substance

The final section (III) contains one elegant, compressed poem that addresses Betsey Garrett signing the IOU not with an X as most illiterate people signed but with a plus sign. The last line of the final poem reads: “Saddled with. Hitched. Held. Bound.” What Nathalie Anderson hopes her readership takes away is the idea that there was an interconnectedness between the whites and the Blacks that is both viscerally animal and human in the sense of marriage. Voices inhabit this 15-line poem—“Pay up, fool. You’ll always owe me more.” “Skin-deep? You don’t know the half.” “More than you bargained for, or you deserve.”

Careful that it doesn’t appropriate a Black woman’s unusual story, Held and Firmly Bound by Nathalie Anderson is remarkable for its sassiness and risk-taking. Find this book from Muddy Ford Press.

Posted by Karren Alenier at 6:05 PM