The Erstwhile Blues of Thomas’ Hamlet

On November 24, 2019 at George Washington University’s Lisner Auditorium in Washington, DC, the Dresser attended Washington Concert Opera’s production of Ambroise Thomas’ three-hour opera Hamlet. WCO last presented this Hamlet in 1998. Since 2002, Anthony Walker has served as Artistic Director and Conductor of this robust musical group now in its 33rd season.

By robust, the Dresser means this—on stage for this production, there were 55 musicians, 40 chorus members, a cast of 9 (two who double) and one very active and enthusiastic conductor.

What stood out in this production for the Dresser was an exceptionally fine cast of singers. Soprano Lisette Oropesa as Ophelia rocked the house with her finely controlled coloratura numbers, especially Ophelia’s mad scene. South African baritone Jacques Imbrailo as Hamlet musically exhibited a range of nuanced emotions without the pyrotechnics Thomas awarded to Ophelia. The Dresser also thinks that Thomas inadvertently tipped a disproportionate amount of attention to Ophelia and that a director has to carefully choose the baritone playing Hamlet.

The Dresser who had never heard work by Ambroise Thomas pauses here to wonder why Thomas made the role of Hamlet a baritone and not a tenor. After all the ghost of his father played most ably by Brian Kontes is a bass baritone and Hamlet’s uncle Claudius (Tom Fox)—brother to and murderer of the dead king—is also a baritone. Additionally, the more minor role of Polonius—father of Ophelia and Laertes—is bass baritone (sung by Timothy Bruno). The Dresser wonders if the composer was trying to make his opera as dark as possible by the high ratio of low tone singers—2 baritone and 3 bass singers.

The only other female voice in this opera is Hamlet’s mother Gertrude. Mezzo-soprano Eve Gigliotti masterfully played that role. She has a powerful voice that she uses well and the ability to show with a glance or a gesture what her character is feeling.

Overall the experience of hearing this opera by Ambroise Thomas was good but the Dresser felt impatient with its many interludes. The musical interludes made the opera seem overly long despite the calming effect felt by the end of the opera. The Dresser also had to let go of comparing the libretto by Michel Carré and Jules Barbier based on a French adaptation by Alexandre Dumas and Paul Meurice to William Shakespeare’s major work of tragedy by the same name. Thomas’ opera cuts a lot out of Shakespeare’s Hamlet, dulling the emotional trauma and psychological complexity. 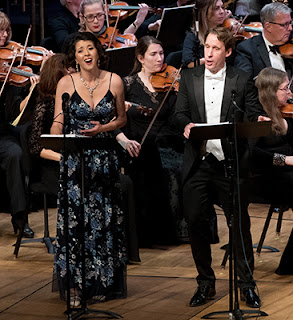 The next Washington Concert Opera will be Verdi's Simon Boccanegra on April 5, 2020.

The Dresser chooses “Kind of Blue” by Reuben Jackson to have the final word in this review because the poem speaks to the knife-stabbing horror suggested by naming the fictional character Norman Bates out of the film Psycho. In the WCO production, the audience does not get to see even a knife among these tuxedo-wearing men not to mention that Hamlet is positioned far from Claudius. Jackson’s final stanza also summons in the Dresser’s mind Ophelia, who in the flower of her youth drowns herself leaving Hamlet alone with his broken heart and erstwhile blues, blues that started with the death of his father.

And if you are like me
You blame yourself
The way you blamed yourself for falling in love
With things which further distance you from your peers,
the planet

by Reuben Jackson
from Scattered Clouds

From the Phillips Collection—The Poetry of the Nabis 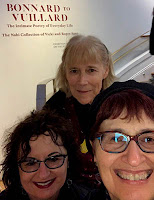 From October 26, 2019 through January 26, 2020, the Phillips Collection in Washington, DC, is featuring “Bonnard to Vuillard: The Intimate Poetry of Everyday Life—The Nabi Collection of Vicki and Roger Sant.” The Dresser sensitive to the title of this vibrant exhibition of works promised by the Sants to the Phillips decided to include literary colleagues and poets Margo Stever and Susana Case in this review.

The Nabis were initially a group of art students who came together in the fall of 1888, after seeing a small abstract by Paul Sérusier. For this painting, Sérusier had been instructed by Paul Gauguin about using colorful paints straight from the tube to express what he saw in nature and to elicit an emotional response. 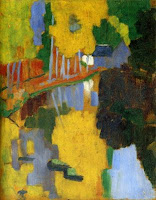 Sérusier’s “Talisman,” painted on the lid of a cigar box, became the flashpoint for this brotherhood that came to include Pierre Bonnard, Édouard Vuillard, Maurice Denis, Aristide Maillol, Paul Ranson, Ker-Xavier Roussel, and Félix Vallotton. The group named themselves Nabi which is a transliteration of the Hebrew word navi, meaning prophet. 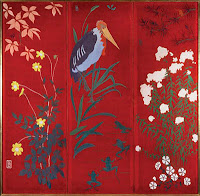 While the works of the Nabis began with Gauguin’s vision of nature, these painters expanded their boundaries to find beauty in the everyday life and the decorative arts (such as screens, stained glass windows, book illustrations, murals, posters, and advertising).

Among the favorite works of the Dresser, Margo Stever and Susana Case is Bonnard’s eye-catching screen “Le Maraboutet les Quatre Grenouilles” (“Stork and Four Frogs”). The screen, which introduces the exhibition, has a distinct Japanese layout except that the color is much bolder and the size of the stork, frogs, and flowers are much larger than what a Japanese painter would have portrayed. Japanese subtlety had no place in the work of the Nabis. 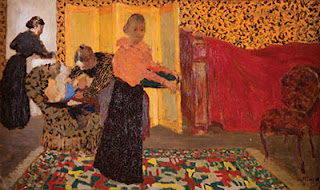 The richly red “Intérieur au lit rouge” or “La Chambre nuptiale” (“Interior with Red Bed” or “The Bridal Chamber”) by Édouard Vuillard caught the visiting poets collective eyes not only for that red bed but also for the patterned wallpaper, festive rug, and sophisticated gray-green chair upholstery with dark, possibly brown or black, irregular splotches. Certainly the three women in the room add energy as well as intimacy as they prepare the room for the bridal night.

The poets lingered over a sobering set of Bonnard works that included a study for “La Petite Blanchisseuse” (“The Little Laundry Girl”) and the actual painting as well as a more full-blown canvas showing the little laundry girl walking in the dusty street at a slight remove from a group of well-dressed high-society denizens. This was one of the few instances in the exhibition of social commentary. 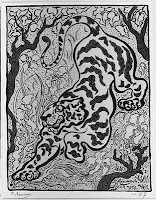 On a more abstract level, the exhibit included a number of works that spoke primarily to design. Two works stood out—one of a tiger drawn with disconnected lines in a landscape that looks more like wallpaper than jungle, Paul Ranson’s “Tigre dans les jungles” (Tiger in the jungle) and the other a young woman reading a letter wearing a blouse that possibly imitates primitive hieroglyphs and which echo behind her in an ethereal backdrop, Vuillard’s “La Jeune Femme lisant un lettre” (“Young Woman Reading a Letter”).

To conclude, the Dresser  asks how does The Intimate Poetry of Everyday Life read? Here are two examples. In Margo Stever’s poem “Surfaces,” the poet explores the subtleties of shadow and light—what moonlight or a dark summer storm reveals in the sleeping chamber, what shapes can be discovered like the blanket imitating the body, what sounds are heard such as the paws of the cats tapping out their desire for food until the sea of rumpled covers calm and the cats, and most likely their humans, curl into sleep.

Take possession
of the blanket, the feel
of it, the smooth

and the lean, the lying
down of it, the way it
imitates the body.

This is the promise
I keep—to rest on the
bed under moonlight.

Yet so many cats
knead the surfaces;
their paws tap-dance,

each other.
Cats’ paws skim
the sheets as if

called by a higher spirit.
Their willowy bodies
curl together in sleep.

In Susana Case’s poem excerpt “No Sign of Activity,” the intimacy of morning between husband and wife turns lethal but also explodes with profound color and intense feeling. Moreover, color in this everyday life is gender coded in the expected way: blue for male and pink for female.

NO SIGN OF ACTIVITY [an excerpt]
by Susana H. Case

Every day, the shoe factory and then,
one day, inevitably, the shotgun.
Blood blooms more robust
than the flowers stenciled
on the yellow, blue, and white
kitchen linoleum.
Blood stains redder
than the Libby’s tomato juice
next to the Heinz Home Style soup.
A box of bullets sits on a kitchen shelf.
That morning, the weather was so clear.

She thought she was a good wife,
set the table for breakfast the night before,

dusted around the easy chair
where he usually reads the newspaper—
this is a gendered household:
blue and pink, blue and pink.
In bed, blood pooled beneath her,
she wears a pink nightgown
under a pink blanket.
On the floor, next to her, is the husband,
face down, in blue pajamas
on a blue comforter.

As the exhibit displays, the Nabis were commissioned to illustrate books of poetry by such prominent authors as Paul Verlaine and André Gide. Collaborations among artists deepen the audience experience. The Dresser thanks her poetic colleagues for the light, color, and contours they added to the experience of seeing “Bonnard to Vuillard: The Intimate Poetry of Everyday Life” and to the writing of this review.
Posted by Karren Alenier at 11:50 AM No comments:

Karren Alenier
is author of seven collections of poetry, including Looking for Divine Transportation (The Bunny and the Crocodile Press), winner of the 2002 Towson University Prize for Literature, and her latest, The Anima of Paul Bowles from MadHat Press. Her poetry and fiction have been published in such magazines as: the Mississippi Review, Jewish Currents, and Poet Lore. Gertrude Stein Invents a Jump Early On, her opera with composer William Banfield and Encompass New Opera Theatre artistic director Nancy Rhodes premiered at New York City’s Symphony Space Leonard Nimoy Thalia in June 2005. She writes a monthly column on opera for Scene4 Magazine at scene4.com.