In a period of abject political rectitude given the negative outcome of the Senate’s vote on including witnesses and documents in the trial to remove an impeached United States president from office, the February 7, 2020 opportunity to hear “Palestrina’s Perfect Art and Music by Renaissance Women” as presented by the Folger Consort with Stile Antico, Tesserae Baroque, and Webb Wiggins at Washington National Cathedral was welcomed respite. While the Dresser did not find the concert as perfect as the program title hinted, there were many moments of exquisite beauty. 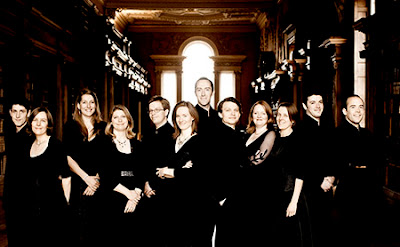 As is the custom with the Folger Consort represented by Robert Eisenstein (viola da gamba, violin and recorder) and Christopher Kendall (lute and theorbo), guest artists provided a large part of the texture and virtuosity of the program. Stile Antico, a 12-member vocal ensemble specializing in Early Music and based in London, provided the angelic sound craved when one enters the gothic-styled Washington National Cathedral. Their name meaning old style was coined during the seventeenth century to describe the style of Renaissance church composition represented by Palestrina’s music. Tesserae Baroque, a fluid group of performers specializing in music of the 16th, 17th, and 18th centuries and based in Los Angeles, provided four musicians playing such instruments as sackbut, cornetto, and recorder to enhance the range and complexity of the Folger Consort strings. Webb Wiggins, a well credentialed organist, added depth on the continuo in this overly large space.

Compositions by Palestrina opened and closed the first set of the program with short pieces by women (Raffaella Aleotti, Maddalena Casulana, Sulpitia Cesis, Leonora d’Este) and men (Giovanni Gabrieli, Claudio Merulo,  Giovanni Bassano, Lodovico Grossi da Viadana) composers of the Renaissance period. Two compositions by Palestrina—the lyrically beautiful but delicate and almost hard to hear “Regina coeli” opened the program while the robust “Stabat Mater” with all performers on stage closed the first set before intermission. Additionally, the first half of the program included Francesco Rognoni’s “Diminutions on Palestrina’s Pulchra es amica mea,” which was performed with organ and cornetto.

The second half of the program introduced three composers not heard earlier in the program. “Diminutions on Palestrina’s Vestiva I colli” by Bartolomé de Selma y Salaverde, Canzon  à