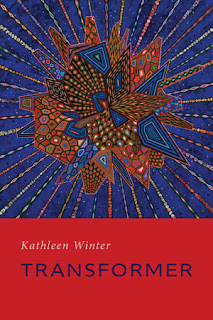 Transformer by Kathleen Winter is the 2019 selection by Maggie Smith for The Word Works Hilary Tham Capital Collection. “The world of Transformer is one where survival requires transformation,” wrote Smith.

“South Huntington Apartments,” the first poem of the book finds an unnamed “you” hiding behind a closet door while some male stalker comes down the cellar steps to the laundry room.

…Is it possible he was frightened
he might kill you? You could see his shoes through the strip
between hinges, high-tops that looked innocent even
when he kicked you. …

The Dresser suspects the person hiding has been accosted by this maniac before and that another time was when the kicking was done.

…You stare
at green laces wrapped over his ankles.
Horses drown in the molasses time
that floods a shadow-tinted room.
Until his fear spins him around
and up the cement stairs…

What is clear is that time has slowed down to stop what? [his wild] horse impulses such that he becomes afraid and retreats. This gives his victim time to transform this Hitchcockian story and flee.

…Three flights up
he sprints but you just need to gain one floor to leave.
You just need one story
and it isn’t his.

Children are also not safe in the Winter’s world:

…
Edgar licked my desk. Did you do something
to make him lick your desk?

I’m attached to my disconnection,
fall in love with a fraction.

I want all these lambs
to escape being mutton.

Thousands of lambs, each pear bough
a glutton.
…

Who is Edgar? Is he also learning fractions? Does he go outside to hear his victim sing a jump rope song that worries about lambs becoming tough meat?

…
His tongue licked my desk
I can see the spit glisten.

Asparagus comes up again
at this season, phallic,

aphrodisiac, perennially pleasing.
Under a tree, enjoy beyond

reason with the person (or persons)
whose desk you have chosen.

The Dresser sees that the victim who has now matured (transformed) in a later spring where asparagus grows once again now understands that Edgar’s craziness was an act of sexual aggression.

WHAT IS NOT RHETORIC

Always a bridegroom,
never the bride to suffice.

When you’re picking them on the basis of paintings,
mistakes will be made.

I’d hope for someone with a sense of humor
but humors were all they had.

were Spanish, Flemish, French.
For God’s sake, why can’t men birth the children?
…

Winter is having a good time making fun of this murderous king. She alters a feminine cliché—always a bride’s maid, never the bride—to heap faux pity on Henry. She allows him to wave away his mistakes based on the preposterous notion that like today’s online dating where photographs are shown, that he sees paintings of his future brides. Then the poet puns on the word humor which in Henry VIII’s day meant the substances black bile, yellow bile, blood and phlegm making up the human body. Anachronistically, Winter refers to the king’s possible brides as bachelorettes and settles with the king questioning in God’s name why can’t men birth the children? A slap in the face of men too funny to be even considered rhetoric.

Needless to say, the poem, with all its delicious sounding words, ends with a head rolling except the language mimics modern expression:  “Swipe left to cut off a head.”

WHAT IS NOT A GIRL’S BEST FRIEND

One of the most difficult poems of the collection is the unpunctuated poem that gives the book its name. “Transformer” starts easily enough but maybe this is a deception since the dog might not just be a pet.

There are three stanzas and the last two (shown below in their entirety) move in large leaps that are too elusive to easily understand. However, science figures largely and grounds what turns out to be an orchestrated transformation (solid to fluid).

The question is what does the ice cube represent? Is it a metaphor for the owner of the dog or that person’s heart since there is so much blood. Stucco, something used in finishing and decorating houses, is made of dehydrated lime, powdered marble and glue. Because it is still (un-dripping un-undulating not /even sinking) and is like the diamond, stucco and the diamond serve as a contrasts to the ice cube. The Dresser wonders if she should think that the stucco/house and diamond are not “a girl’s best friend.” Even the dog seems a bit menacing in his obsession with “his canines,” those pointed teeth. 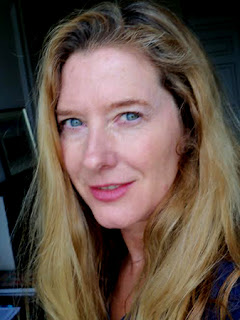 Thanks to Hal Greenwald for reading and discussing Transformer with the Dresser.