What is Beyond Our Reach …or Not 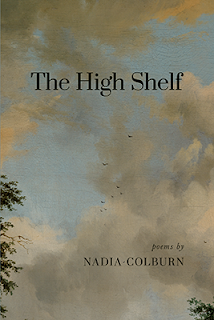 Meditation, Daoism, and the teachings of Thich Nhat Hanh guide the spirit of Nadia Colburn’s The High Shelf. This collection of poetry is a balance of yin and yang—life and death, light and shadow, sound and silence, form and formlessness, imagined and unknown, the ten thousand things and the unnamed…

“Pregnancy” in Section 4 (there are 6 unnumbered sections) is the glue of this work. In very complicated ways, it illuminates the opening poem “Into Time” on the question “what do we not become?” The last lines (which are also one line stanzas) of “Pregnancy” suggest the process of birth:

Something’s about to disappear.

Something’s about to take form.

Relative to what happens to a woman who becomes pregnant might be that she loses her virginity (she disappears as an innocent, as a virgin) and within her forms a child.

“Into Time” opens the collection in fall when leaves are turning yellow and the narrator anticipates the leaves dropping from the trees. However, something else is going on as the reader is introduced first to a red door and perhaps the anticipation of it opening. Coming at the beginning of this work, the red door is significantly symbolic.

Any moment, the red door.

Then, the leaves,
the many leaves, all yellow now,
they are so thin, I can feel them
ready to fall.
One breeze, and you:
there, walking
or standing alone—

What, what do we not become?

In an old practice of Catholicism, churches had red doors which represented the blood of Christ. To pass through that red door was to enter holy ground.  “Plentitude/Pregnancy,” the second poem of the book, identifies that the narrator is “in an older country, no longer home” and then the landscape comes into view with terraced hills and what appears to be olive trees. Possibly the country is Italy where the religion is Catholicism. However, despite the possibility that the red door and the falling leaves might suggest Eve and her fall from Eden, the negatively stated question what do we not become suggests something less prescribed, less dogmatic. Here, the narrator may be easing the way for a Westerner who has grown up in the Judeo-Christian belief system to make room for Eastern philosophies. This also might account for why the you in the poem is walking or standing alone. On the other hand, the red door could describe what happens when a child is born—that a baby comes into the world with his mother’s vaginal bleeding.

“Pregnancy” is divided into four parts and spans two pages of the book. Every sentence is a separate stanza with one exception. In the first section, the poet asks the reader to imagine laundry on a line and then declares that the laundry “mirrors the white of the sky.” But, this is only “one scenario” because “The sheet dominates, undoing the meaning of sky.”

A second scenario forms in section two as well as a possible second meaning for the word sheet—“… the sheet on the line slaps furiously as a white sail on a sinking boat at sea.” While the sheet on the line is the bed linen seen in section 1, it also suggests the nautical terminology indicating a rope that controls the sails of a tall ship. Then comes a dizzying discussion of domination where nothingness and wind seem to get control over the sheet with the sky refusing to participate and taking on “the look of the dead sailor,” whereupon “the sheet becomes a shroud.” Again, shroud suggests a double meaning—the wrapping cloth for a dead body or the support rigging that holds up a ship’s mast. But no, the last stanza makes clear what hangs on the clothesline is bed linen or does it—“Out in the backyard, the sheet becomes a shroud. Perhaps.”

Why in a poem title pregnancy are there mentions of sheets, a sinking boat, and a dead sailor? Typically, in Western culture, a woman births a child from a bed, be it the matrimonial or hospital bed. One never knows if the fetus in its saline sea will actually become a living child. As the Biblical interpretation goes, once Eve accepted the apple of the Tree of Knowledge from the snake, she was then thrown out of the Garden of Eden and made to suffer in bringing forth progeny. It’s the connection to the Tree of Knowledge with the mast of a ship that makes  it possible to associate shroud the support rigging that holds up a ship’s mast.

The book ends with “What Can’t Be Held” which contains these words, “and I/ toward the future, like a sailboat to wind…” This time it’s  an optimistic view of the sailboat, but like a child, it  cannot be held up from moving on with life. 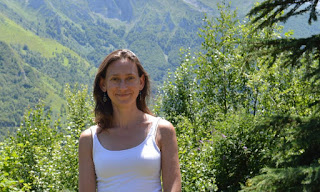 The High Shelf offers countless opportunities to meditate on its meaning and on the meaning of life (and death) in our chaotic universe, to experience the beauty of an artistic still life, to call up a 1960s pop song like Malvina Reynolds “Little Boxes,” but the Dresser will conclude with a few more words about the title of this complicated but well connected book. The book’s title appears first in “Explanation of the World” which follows “Pregnancy” and its companion poem “(Pregnancy).” Beside shelf and high shelf, the poem contains such words as boxes, one, other, wall, firmaments, supports, shells, trees, circle, sea. These are the components of our world, which the poet doesn’t attempt to explain. It’s an offering such as an aboriginal might hold out (beads or, better yet, shells) as a trade. Yes, strangeness exists but sit (or sail) with this poet and experience. It’s a book that we have time for during our worldwide pandemic.

The Dresser acknowledges that The High Shelf by Nadia Colburn is a book published by The Word Works.