Women of the Big Sky


With the racially charged implications of George Floyd’s death, Americans—the Dresser intentionally chooses Americans for its large embrace of North, Central and South America—have become more painfully aware of the white majority’s many actions-campaigns-wars-pogroms-holocausts (call it what you will) to eradicate or enslave minorities, including indigenous peoples who called the Americas their sacred home. 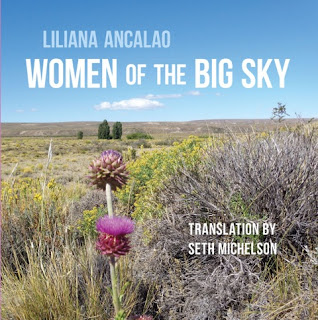 Liliana Ancalao in her new collection of poetry Women of the Big Sky as translated in English from the Spanish by Seth Michelson attempts to reclaim and preserve Mapuzungun (ma-poo-zoon-goon), the nearly extinct language of her Mapuche ancestors. She wrote half of her poems in Mapuzungun and half in Spanish.

According to “Death, Biography, and the Mapuche Person,” an article published in Ethnos: Journal of Anthropology (April 2007), the Mapuche people numbered one million in Chile with an additional 40,000 on the Argentinean side of the Cordillera mountains, which is where Ancalao’s family resides. As Michelson mentions in his introduction, Mapuche life was seriously changed by the arrival of Europeans in 1520. However, it wasn’t until 1880 that the Chilean Mapuche people were defeated and assigned to “three thousand lineage-based reservations.” (“Left, Right: A Walk with the Sons of the Gods; Mapuche Concept of Ultimate Reality and Meaning,” by Louis C. Faron, University of Toronto Press, January 1982, Vol. 5, No. 2 PP 88-103) Apparently the Mapuche were fierce warriors. One can only assume something similar happened to the Mapuche living in Argentina. 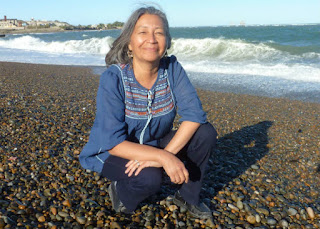 Ancalao grew up speaking Spanish, the language of her people’s oppressors. She writes in “Memory of the Sacred Land,” her long prose introduction that she, her five siblings and other children similar in age and heritage “were born in the time amnesia…without memory.”

The Dresser thinks Women of the Big Sky published by The Word Works requires a strategy for how to read it. Reclaiming a lost language requires some effort, effort that will be rewarded if the reader is given some help.

While reading poetry is often a solitary pursuit, the Dresser recommends that a reader find a reading partner and read the following out loud as a way of entering Women of the Big Sky:

—Start with the first poem “this voice.”

Starting with “this voice,” will give you a sense of the author’s anguish about what has happened to her people—“my sobs surging from my blood/ shouting/ into an abyss of silence.” You will also notice the attention paid to other living creatures: the “watery lapwing” (a type of bird in the plover family), condor, foals to describe the author’s state of being. And finally features of the land rise and fall through this poem: “i think of heights/ i’m a condor throwing herself against the cold” [mountains], “volcanos become flames in my fingers,” “this voice/ that’s ash on the lips/ wants to be a waterfall in the desert.” “this voice” is a powerful opening to a remarkable look at the Mapuche—“people of the land”—who European settlers and dictators tried to erase.

—Next, read the author’s introduction “Memory of the Sacred Land” which will provide some explanation of unfamiliar words and cultural background.

—Then, read “the silenced language,” Ancalao’s closing text which illuminates the author’s introduction, especially why the emphasis is on women. In this text, Ancalao refers to Mapuche women singing “their tayüles” which are sacred songs of family lineage. Additionally, there is a short, helpful glossary that follows “the silenced language.”

This approach should open up the poems and the introductory texts.

REMINDERS THAT THE POET IS NOT LIVING IN THE PAST

The Dresser’s favorite poem of the collection is “when i die i should cross the river.” It might be analogous to the Greek story of Charon who ferried people from the world of the living to the world of the dead. In Ancalao’s version, the male Charon is replaced by an “old lady” who takes the passenger’s payment. In “women and the wind,” Ancalao introduces “the Greek [who] warned me/ translating the coffee grounds.” So, we know Ancalao has experience with Greek traditions, especially those that involves shamans and the dead. Possibly, Ancalao uses references to the Greeks as a way to introduce Mapuche legends to an audience schooled in Western traditions. What the Dresser likes about “when i die i should cross the river” is that it shows the importance of musical instruments like the kultrun, a large wooden kettledrum made from a hollowed out “tree of power” that was used by the Mapuche machi (shaman) and the trutruka, a Mapuche horn that has a harsh sound. 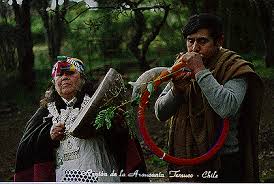 Understanding the importance of the kultrun in these lines makes the opening lines of “this voice” more accessible: “she breathes the membrane/ of a drum soaked in a throat/ stretching from a skin of stitched leather/ to the distant/ watery lapwing.” The point is that reading Ancalao’s poems provides a circular experience such that while the reader might not immediately understand everything, eventually new information will surface. Additionally, the modern world also pops up occasionally to remind the reader that the poet is not living in the past. For example at the end of “when i die i should cross the river,” Ancalao mentions plastic bags.

The question is will the reader be willing to sit with this unfamiliar experience and rise to the challenge of participating in the poem? Yet another reason to have a partner with whom to read this collection.

Women of the Big Sky is a large format book to accommodate a simultaneous trilingual experience.

Thanks to Hal Greenwald for reading and discussing Women of the Big Sky with the Dresser.