A good comedic film is much harder to create than a dramatic one. Jonathan Smith, a 2004 graduate of Yale University’s Film Studies, approached The Dresser to review his third feature film Batsh*t Bride for which he wrote the script and directed the film. He states in his press kit, “I wanted simply to make a bright, fun comedy—a little piece of confection—that makes you laugh.” Yes, he bakes a cake that made the Dresser laugh. 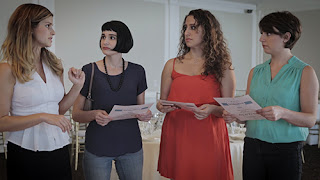 The story opens in the spring around April Fools’ Day as Heather, a driven event planner (Meghan Falcone), is making crystal clear that her wedding will be perfect in every detail. After she tries to reorganize what her bridesmaids have planned for her, they tell her she has no sense of humor and is too controlling. So she decides to prove them wrong by pranking her groom Bryce (Josh Covitt) with the announcement that their relationship has lost its spark and she is calling off the wedding. To her surprise, Bryce brightens up and says with great relief that he was thinking the same thing.

The exchange takes place in a restaurant and reminded the Dresser of the iconic scene in When Harry Met Sally as Sally fakes an orgasm and a woman (played by Estelle Reiner) at a neighboring table says, “I’ll have what she’s having.” In Batsh*t Bride, the argument that then ensues between bride and groom incites other diners to complain because they don’t want what’s going down between the young couple, except that Heather, who is full of chutzpah, puts up her hand and won’t allow interruption.

At this point, the Dresser understood what the vulgar film title meant—mad or crazy and that the filmmaker wasn’t trying to invoke some foreign language. However, the Dresser had already associated this bride film with the Israeli movie The Wedding Plan where the bride asks her groom why he seems so unhappy and he answers because he realized he didn’t love her. So he backs out and she, an ageing (in her 30’s) orthodox Jew, decides she will go ahead with the wedding putting her faith in G-d that He will provide a groom. 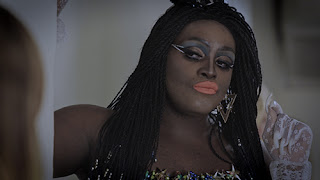 While Batsh*t Bride doesn’t have the depth or the cultural exoticness of The Wedding Plan, when Heather goes to city hall to get the marriage license, her life of privilege begins to unravel. She bribes two homeless men to help her, which the clerk, of course, sees through. It’s a wacky scene worthy of Lucille Ball. Shockingly, Heather tries to attack the clerk, gets arrested, even tased, and thrown into the drunk tank, which is where, to the Dresser’s taste, the most important and pivotal scene occurs. The drag queen Pandora, whom her friends invited into their limo on the night of Heather’s bachelorette party,  affirms that Heather is a bitch, but asks her if she could also be a good person. 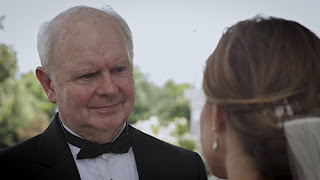 Every time Heather decides to tell her father (Patrick Collins) that the wedding is off, he, Mr. Papadopoulos, surprises her with yet another family member who has made the arduous trip to be with her on her wedding day. While this big fat—possibly Greek— parade of relatives was understandable, it felt overused. However, Meghan Falcone does a great job in the style of Reese Witherspoon of backing away from each relative that prevents her from telling her father what the hard truth is.

The clarity of Jason Merrin’s cinemaphotography, the original bubbly music by Mike Pettry, and the accomplished acting of the entire cast are first rate. It’s a pleasure to see a young filmmaker undaunted by the obstacles raised by a worldwide pandemic. As is the Dresser’s custom, she gives the last word to poetry. John Pauker’s “Screaming Poem” suggests that practice and timing in art is everything and no where could this be truer than in making a comic film like Batsh*t Bride.

In order to make art you have to scream
From time to time.

In order to make art

You have to scream from time to time.

To make
Order in art you have to scream from time
To time.

To order art you have to scream

From art to order and from time to time.

by John Pauker
from In Solitary and Other Imaginations