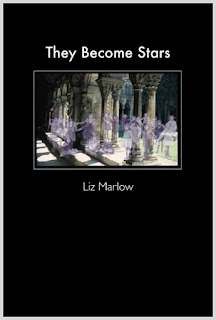 The Dresser read Liz Marlow’s beautifully rendered chapbook from Slapering Hol Press They Become Stars in one sitting and shortly thereafter heard Marlow read some of these difficult Holocaust portraits mostly focused on a complicatedly vile Jewish man named Chaim Rumkowski. Then the Dresser had to let the work sit to achieve some distance as she believes poet Liz Marlow was able to do in writing this work, such that there is little passion expressed, and certainly no compassion. How could it be otherwise?

Historically, Rumkowski was a Jew who headed the Jewish Council of Elders (Judenrat) in the Łódź Ghetto of Poland. Like other Jews, he was forced into this position which obligated him to make life and death decisions about the people under his control. Fully embracing the Nazi motto of Auschwitz—Arbeit Macht Frei (Work Sets You Free), he seized Jewish businesses and put people to work, which kept some of them alive for a longer period of time. However, he was seen as a collaborator who went beyond human decency, including convincing families to give up their children ten years and younger and their elderly 65 and older so that the rest could live. Before the Nazis came to power, Rumkowski ran an orphanage. 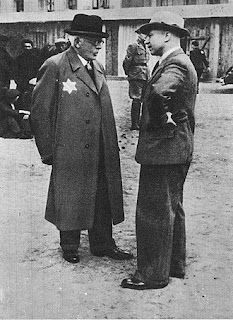 The chapbook opens in Rumkowski’s voice as he describes a boy sitting alone avoiding other children in an orphanage. In the following excerpt from “Chaim Rumkowski on Hunger, 1938,” before understanding that Rumkowski was a pedophile, the Dresser felt confused about the title addressing hunger. The boy draws a circle on the ground with a stick and Rumkowski wonders if the child is making a map to find his way home. Nothing in the poem suggests the boy is hungry.

…
If I  were to reach
out to him,
would his skin
be soft like freshly
laundered shirts
or dry and cracked
like the earth?
In another life, he could
be mine.

It is only after reading the next several poems where we see that Rumkowski is molesting little girls that the Dresser, on second reflection, understood that the first poem refers to Rumkowski’s appetite for vulnerable children. It’s his hunger, not the child’s. The horror magnifies at the last two lines which is not a sentiment of tenderness from Rumkowski, but rather the realization that this boy is in a public space and the predator has no good way of getting his hands on the child.

The title of the chapbook is particularly apt though it will ambush the reader who knows nothing about Rumkowski. Of course, the author is not suggesting that anyone in her work will become famous, though Rumkowski did go down in infamy. The reader is immersed in the importance of they, the Jews, becoming stars in “Chaim Rumkowski Leads a Jewish Council Meeting on the Body.” What follows are the opening stanzas.

Three men and one woman
sit at a table discussing
how to save the body.
Rumkowski says, To save the body,
we must cut off the limbs.

The woman, a mother, says,
The limbs you speak of
are the body.
Though we wear stars,
we are not starfish.
When we cut off limbs,
they will not grow back.

Here is the closing stanza:

The woman counters,
The body is who will live days
so countless that they birth
more days. Days more than the stars
we wear on our jackets.
Without the body, there is no life,
not even a constellation to fill darkness;
there is no universe. There is nothing.

While the Dresser is bothered about the reference to a constellation (which indicates a group of stars) as opposed to a single star, the poem hugely testifies to Rumkowski’s abject cruelty. The 10-word title of this poem bears the explanatory  epigraph “Days before the transport of 15,700 children to Chelmno Extermination Camp, September 1942.”

Marlow invests a great deal in the imagery and metaphor of the star as a representation of the targeted Jews. In “Heinrich Himmler and Arthur Nebe Discuss Humane Killing,” one of the few poems in which Rumkowski plays no role, the author reveals Himmler vomiting after he was sprayed with blood and body bits the first time he witnessed a mass shooting of Jews.

…
When Himmler felt
disgust
as he had never felt
anything else
while leaning
toward the grave pit’s edge,
while watching
limbs shape themselves
into Stars,
he knew
debris bursting
from him
was too much for his
men.
…

Limbs shaping themselves into Stars is clearly meant to tie Himmler to Rumkowski in this poem that documents how the Nazi extermination plan moved from firing squads to gassing. Yes, the hunted Jews of Poland and Europe became stars and then stardust or more accurately black holes.

As mentioned, the chapbook is distinctively produced, using high quality black paper as the cover, silver end papers, and silky interior stock. The front cover has a glued photograph in a cutout window—“Children of the Holocaust” by Lynn H. Butler which overlays an archival image of a place where atrocities occurred within the composition from The Children of Izieu: A Human Tragedy by Serge Klarsfeld. The image makes the children ghostly figures encircling a series of majestic columns. Inside the chapbook, the cover page imprints a negative of the exterior photograph. Slapering Hol Press is known for its exceptional print quality productions and They Become Stars is no exception.