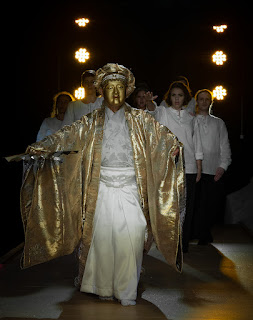 The IN Series of Washington, DC under the direction of Timothy Nelson and in partnership with Theatre Nogaku (an international Noh drama group) premiered an extraordinary new opera entitled The Nightsong of Orpheus. The Dresser attended the opening night performance September 9, 2022. The work is an amalgam of story, music, and dance based on two Claudio Monteverdi compositions: Vespers and L’Orfeo as performed by the Innovãtiõ Baroque Orchestra, Akira Matsui—master teacher-artist of the Kita School of classical Noh, and a cast seven singers. This intimate production, presented first at the Source Theatre (later performances run at the Dupont Underground), features a runway stage with limited audience seating on either side with the orchestra positioned at one end of audience seating.

Monteverdi’s L’Orfeo is based on the Greek myth that tells the love story of Orpheus and Eurydice, her death, and his attempt to bring her back to life.  Nightsong uses Christopher Cowell’s English translation of Alessandro Striggio’s L’Orfeo (Italian) libretto.

Monteverdi’s Vespers is a sacred composition venerating Mary, mother of Christ, and her praise of God. It was written in the same year as L’Orfeo and shares some of the same music. Segments of Vespers presented by the Noh characters of Nightsong are in Japanese as translated by Eiki Isomura.

The singing talent for this production was considerable. Given how small the theater space was, the sound vibrations were not only heard but felt. Standout performers were mezzo-soprano Janna Critz, baritone Robin McGinness, and countertenor Hunter Shaner. 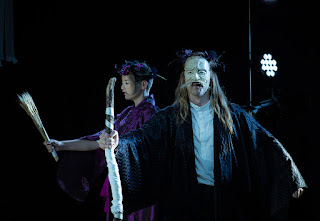 The Noh costumes and masks added color to the mostly black-pants-white-shirts outfits of the singers. Japanese toe socks were worn by all the players except Orpheus (tenor Tony Boutteé) who was barefoot.

Another unexpected and exotic element involved calligraphic painting on the papered floor of the runway stage. In the tradition of ephemeral brushstroke art, the papered floor was torn away at the end of the production to signal that human life (i.e., that of Orpheus and Euridice) and its stories were limited.

Historians and critics agree that L’Orfeo marks the beginning of great opera. With The Nightsong of Orpheus that combines early baroque music with centuries old Far Eastern theater, the IN Series has given opera as an artistic discipline and the work of Monteverdi a fresh framework for current day theatergoers to discover, absorb, and enjoy.