Opera from the P.O. UrbanArias at Washington, DC’s Keegan Theatre has produced a vibrant world premiere with Stephen Eddins’ chamber opera Why I Live at the P.O. The libretto by Michael O’Brien is based on Eudora Welty’s short story by the same name. The vibrancy manifests in the outstanding cast whose singing and acting both excites and agitates the ear and eye. Notable as well is Brian Ruggaber’s two-level scenery that adds an additional polish to this production.

The Dresser, who saw the May 1, 2022, performance, particularly appreciated coloratura soprano Melissa Wimbish’s creation of the character Stella-Rondo, the sister who returns home and spoils the narrator’s peace causing the narrator to move to the post office where she is postmistress. In the librettist’s interpretation of Welty’s story, the narrator—sister to Stella-Rondo—has two roles, her younger self Sister 2 (sung by coloratura soprano Kyaunnee Richardson) and older narrating self Sister 1 (sung by the award-winning Emily Pulley). 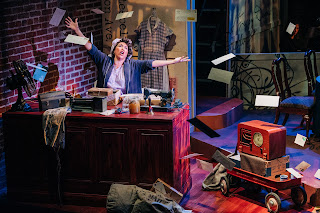 After Stella Rondo returns home, leaving her husband Mr. Whitaker and bringing with her a young child known as Shirley-T, things heat up between the sisters in a rivalry that is fed by their parents (baritone Eric McKeever plays Papa-Daddy and contralto Alissa Anderson plays Mama) and their Uncle Rondo (tenor Ian McEuen). Stella Rondo introduces her child Shirley-T (represented by a doll) as her legally adopted daughter, but Sister 2 remarks that if Papa-Daddy cut off his beard, Shirley-T would look exactly like him. The suggestion of cutting off his beard angers Papa-Daddy. Not having read Welty’s story in advance of the opera performance, the Dresser initially wondered if the story would reveal incest, because we never learn why Stella-Rondo leaves her husband and comes home. We do, however, hear repeatedly that Sister was the first to date Mr. Whitaker. Then there is the matter of Uncle Rondo showing up and asking to borrow one of Stella-Rondo’s kimonos. Why Stella’s name has an appended Rondo is also a mystery of the original story. 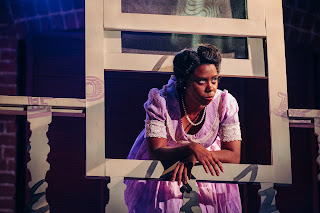 Something is off in the story. This is not a Southern story like what Tennessee Williams or William Faulkner serves up. This is absurd. This is a comic opera and to heighten how Why I Live at the P.O. has an unreliable narrator, librettist O’Brien splits the unnamed sister’s role in two parts and, furthermore,  Dennis Whitehead Darling as Director casts Sister 1 as a white woman and Sister 2 as a woman of color. Given Sister 2’s costume with her apron and purple gingham dress, the Dresser thought initially that Sister 2 was the household maid. However, Welty’s narrator gave herself a decidedly domestic role in her family.

Eddins’ tonal music moves back and forth between jazz and contemporary classical. Featured in the chamber orchestra conducted by Robert Wood are winds and horns. The instruments include flute, 2 clarinets, saxophone, trumpet, trombone, string bass, percussion, and piano. Most of the singing is ensemble with, to the Dresser’s ear, no memorable arias except perhaps the number Papa-Daddy sings regarding his outrage over the idea that he cut off his beard. While Welty’s story suggests a rising level of stress, the Dresser thinks that the forte-fortissimo production of unrelenting sound was hard on the listener and that a lullaby, perhaps around the introduction of Shirley-T, would have been a welcomed respite to have in memory.