The Seven Voices of Seven Guitars

The blues, music and grit of the life inspiring such melancholic tones, infuses August Wilson’s play Seven Guitars, especially under the direction of Tazewell Thompson at Washington, DC’s Arena Fichandler Stage. Opera aficionados may know Thompson worked as librettist with composer Jeanine Tesori on Blue which enjoyed its world premiere at Glimmerglass in November 2019. For Seven Guitars, Tazewell has enlisted sound designer Fabian Obispo who has pleasurably woven additional blues songs as introductions or interludes to the tunes written into the script by August Wilson. The Dresser saw an engaging performance of this production on December 4, 2021. 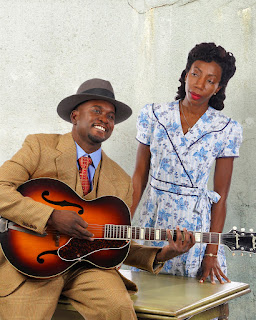 “Suffering the pain of living,” aptly sums up the Black experience of Wilson’s seven characters in a story focused on a guitarist named Floyd “Schoolboy” Barton (Roderick Lawrence) whose song “That’s All Right” unexpectedly is being played and popularized on the radio in Pittsburgh where he lives. Floyd is on his way to recognition with an invitation to record his music in Chicago. However, he has just been released from the Workhouse (jail) for vagrancy and he needs to recover his electric guitar from the pawnbroker. He tells Vera (Joy Jones), the girlfriend he jilted, that he wants her to go with him to Chicago. Meanwhile, Canewell (Michael Anthony Williams), the harmonica player in his band, has been courting Vera. The pain of living comes up in an exchange between Floyd, Canewell, and Hedley (David Emerson Toney), a patois-speaking man who says Buddy Bolden (the first jazz musician and cornetist) is going to bring him money so he (Hedley) can buy a plantation where no white man can tell him what to do.

The play, part of Wilson’s ten-play series on Black life in the Twentieth Century and which premiered in 1995, continues to speak to issues of our day—Black-on-Black violence, police harassment of Black men, rural-folks-versus-city-dweller prejudice, poverty, and abusive fathers. The play opens and closes on the death of Floyd. In the first scene, we experience his funeral and, in the last, we witness how he is killed and who kills him. In between, we feel the pain and joy of these characters. A favorite scene occurs when the three members of Floyd’s band make music with an old guitar, harmonica, and drumsticks played on a table. Of particular poignancy is the comic scene that turns dark dealing with a noisy rooster, a metaphor for the Black men in this story. Canewell tells his friends that the reason the rooster crows so loud is that before the Emancipation Proclamation, roosters didn’t crow, but after [Black] “people got to whooping and hollering so” and the rooster “say, ‘Naw, you all ain’t gonna leave me out.’” 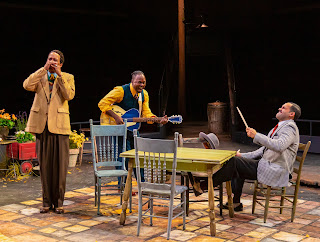 The players all meet the exigencies of their roles—Roderick Lawrence as Floyd “Schoolboy” Barton is impetuous and reckless. David Emerson Toney as Hedley is unpredictable and hard to understand. Joy Jones as Vera is naïve and doleful. Michael Anthony Williams as Canewell is sweet (like his name that refers to sugar cane) and boyish. Roz White as Louise (Vera’s roommate) is motherly and the voice of reason. Dane Figueroa Eddi as Ruby (Louise’s Alabama cousin running from a murderous and jealous boyfriend) is a hotpot of sex. Eden Marryshow as Red Carter (drummer in Floyd’s band) is a smart ass and skeptic. Sometimes, what these seven voices say plays out too fast to grasp. This is a long play clocking in at just under three hours with one intermission that requires sharp attention to fully enjoy the emotional load. This is a play you might want to see more than once.

Posted by Karren Alenier at 2:30 PM