The Wistful Liveliness of The Dead


Coming late—January 2, 2020—to Scene Theatre's and Robert McNamara’s seamlessly lyrical production of TheDead, an award-winning musical by composer Shaun Davey with book by Richard Nelson based on James Joyce’s short story by the same title, the Dresser is grateful to have experienced this wistfully lively show with musical direction by Greg Watkins. Set at Christmas and during a Christmas party at that, it is the perfect winter holiday story. Everyone sings at this party, even the housemaid and the hired man who helps serve the dinner. 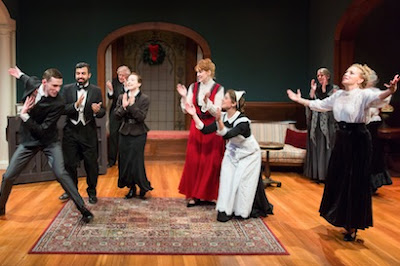 Everything about this production staged at the Atlas Performing Arts Center in Washington, DC pleased. Carl Gudenius’ set showing the audience three areas of a house—entrance hallway, grand living room with piano and window with an alcove bench, and dining room with a large formal table and chairs—included lots of eye-catching details like a handsome area rug in the living room. The costumes by Alisa Mandel offered realism and flair, particularly in the lovely lace worked into many of the women’s blouses and, of course, the Irish are known for their handmade lace.

What carried the show was the fluid music and dance performed by an able cast of thirteen. 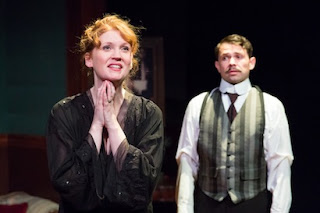 The story at the heart of this musical involves a man named Gabriel Conroy, played by Louis LaVoie, who serves as the narrator, filling in what is not imparted by the musical numbers. He is very much in love with his wife Gretta, played by Danielle Davy, whom his doting and elderly spinster aunts—Aunt Julia Morkan (Andrea Hatfield) and Aunt Kate Morkan (Rosemary Regan) tend to discount, calling Gretta country cute. Nearly everyone at the party initiates a song. Gabriel and Gretta sing “Adieu to Ballyshannon,” a lilting tune in waltz tempo that the partygoers all love even though the couple has sung the same song in other years. Later, Gretta moved by Bartell D’Arcy (Leo Delgado), the special guest who is an opera singer, says she will sing a song that she is reminded of and which, she tells her husband who offers to help her sing it, he has never heard before. She strikes a far away look of radiance and sings in a mesmerizing delicate voice about a lost love of hers by the name of Michael Furey. Initially, Gabriel thinks she is singing about him, but later to his abject disappointment discovers not so. He is sadly angry that she has never told him about this man whom she then reveals died at the age of 17 hopelessly in love with her.

There is lots of fun choreography including a heel-clicking dance to the tune of "Three Jolly Pigeons" by a drunken young man named Freddy Malins (John Gerard Healy). 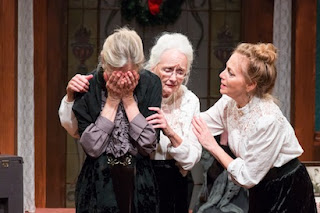 A subplot is the failed lives of the elderly aunts who live their whole lives through performing and teaching music. At the end of the party, Aunt Julia, dying, is visited by a younger apparition of herself, played by the intriguing looking Antonia Romm, who might have the face of medieval angel.

In Rocky Delaplaine’s poem “Watching Romeo and Juliet,” the narrator is reminded of a past romance with a man who is still the handsomest man she knows. Unlike Michael Furey, the handsome man of Delaplaine’s poem is still out there driving nails and building houses but the poet has chosen another man, her current husband, to build a family with. In James Joyce’s story, the reader never gets to know if Greta would have married Michael had he lived. Therefore, The Dead is a bittersweet story.

Tall oaks frame a make-shift stage.
Families gather at River Bend Park
on a warm August night to picnic
and see their kids in a Shakespeare play.
A half-moon rises over the Potomac.
The platform—twelve sheets of plywood
propped on two-by-fours. Staring
at this pared-down set, I think of a man
I left long ago, a carpenter and homebuilder
by trade. Why did I leave, exactly?
At 60 he’s the handsomest man I know,
can still drive a nail through without
hitting the wood. The night I left him
he howled as though his leg were caught
in a steel trap. Never, I vowed, never again.
And who is this man next to me now,
our daughter edging up a few rows to sit
with friends? When the young lovers kiss
I envy their passion, but not their impatience.
At intermission the director reminds us,
If they marry, it’s a comedy, if they die,
it’s a tragedy. On the drive home,
our thirteen-year-old wonders out loud,
It’s both, isn’t it? Yes, I say, it’s both.

by Joanne Rocky Delaplaine
from The Local World
https://www.wordtechweb.com/delaplaine.html

Next play by Scena is Ajax by Sophocles and directed by Robert McNamara from March 20 to April 19, 2020.