Whisper loudly that, with this review of Grace Cavalieri’s long poem Showboat, her 21st collection of poetry, the Dresser has phoenix-ed the Scene4 Magazine blog The Dressing.

Grace Cavalieri’s Showboat has arresting wires to The Odyssey, the Greek epic poem attributed to Homer, the mythological tome that tracks the hero Odysseus’ dangerous trek home from the fall of Troy. Cavalieri’s sets up her story of being a US Navy pilot’s wife with three quotes that speak to her subsequent approach which mixes low and high art. No where in these lines by American country singer Dolly Parton, German mystic poet Angelus Silesius, and the multi-award-winning American poet Bob Hicok has she tossed the reader a hook alluding to The Odyssey. However, the back cover of this chapbook pulls one up short with this stanza from the poem:

Cavalieri’s stanza 34 echoes how Penelope, who was true to her husband Odysseus and worried for his life, had to deal with unwanted attention from would-be suitors.

At stanza 28, Cavalieri readies the reader for the more overt Greek epic poem connection when she reveals that while she is waiting for the return of her larger-than-life, war-fighting pilot husband, she is reading—to her young daughters, no less—Kazantzakis, the Greek author who wrote Zorba, the Greek and who was nominated nine times for a Nobel Prize without winning one. Something Cavalieri, who has promoted  thousands of poets through her remarkable 42-year-old radio program “The Poet and the Poem” without a whiff of prize recognition, might be willing to speak to.

At stanza 73 out of a total of 75, the poet questions, “How could I a frightened/ Traveler be given so much/ should I list his love…” as well as “How could he be dead/ If his clothes/ Hang in the closet and every day/ I lay out a clean shirt in/ Case it’s needed”. While Penelope busied herself with weaving a shroud for Odysseus' elderly father Laertes to ward off the Suitors, Cavalieri ever true to her husband Ken continues to lay out his clothes for the man who came home alive and whole from his life as a Navy pilot, grew old with her (he too as artist--metal sculptor), and then died. Women have always been associated with fabric as a metaphor for relationship, as the way women take care of their men.

Cavalieri opens and closes her epic poem by setting the telling of the work in a retreat house in New Hampshire. (She in fact has become the Traveler.)  The precursor stanza, appearing alone before the poem starts (call it Stanza 0), reads like a mysterious proem where birds stand in for the jets Ken flew and the poet is “Pressed against the pane” (or should we read "pain"?),  a line that seems to refer to stanza 30 “Women have windows/ From the beginning/ For good reason Mary Ellen and I flew…”. At the end of Showboat, the poet re-evokes New Hampshire and the window pane, writing it is “cracked from the course of time/ It’s just the brink of the abyss/ follies of stained glass”. No reason to stop here, Dear Reader, other themes abound in this surprising, pointillistic poem with artwork by Dan Murano and Cynthia Cavalieri. 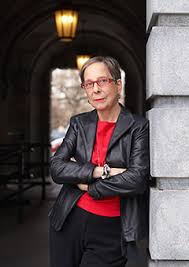